Amid a wave of attacks on controversial figures around the world, following the worldwide protests after the custodial killing of African-American George Floyd in the US, some unknown miscreants in the Netherlands’s capital, Amsterdam, vandalised Mahatma Gandhi’s statue with graffiti and spray paintings. 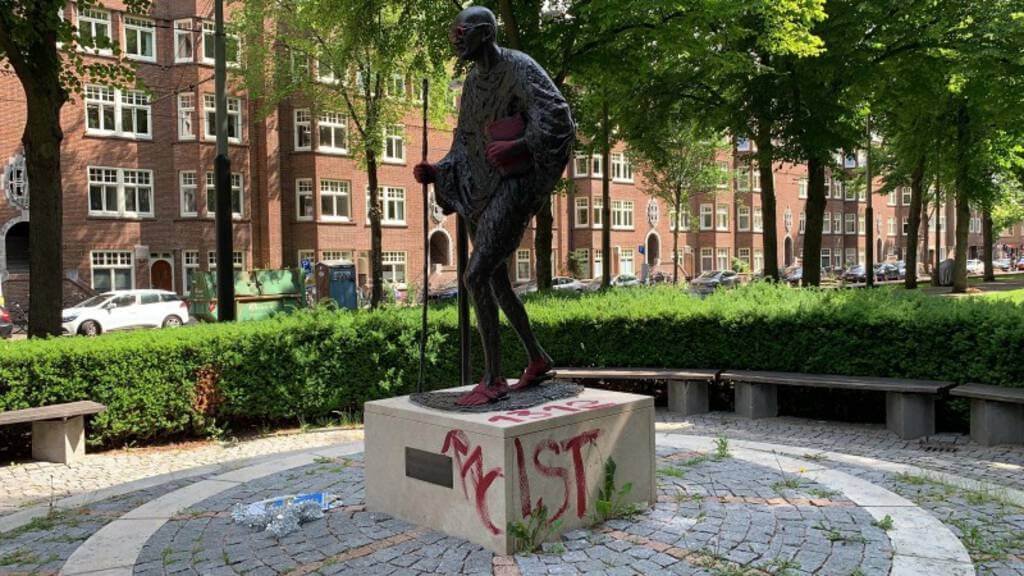 According to the Dutch newspaper ‘Metro’, The statue of Gandhi on the Churchilllaan in Amsterdam was covered with red paint and the pedestal has ‘racist’ and an abbreviation for an expletive against the police chalked on it. 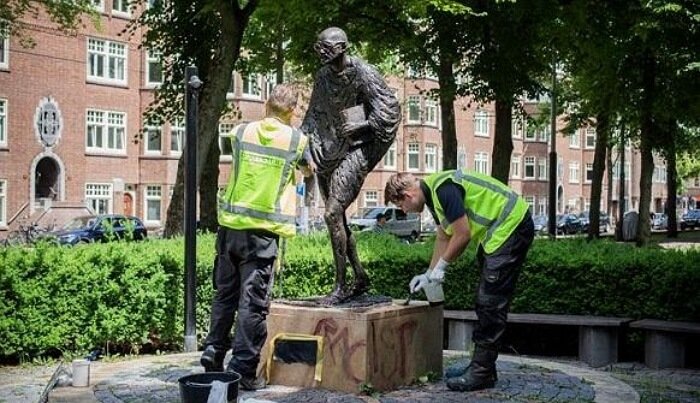 According to alderman Rutger Groot Wassink, the municipality will file a declaration for daubing. “Obviously, we are opposed to any form of vandalism and daubing of these things is completely unacceptable,” the city official was quoted as saying by the AD.nl. “It is logical that we will file a declaration, the image will be cleaned,” Wassink said. 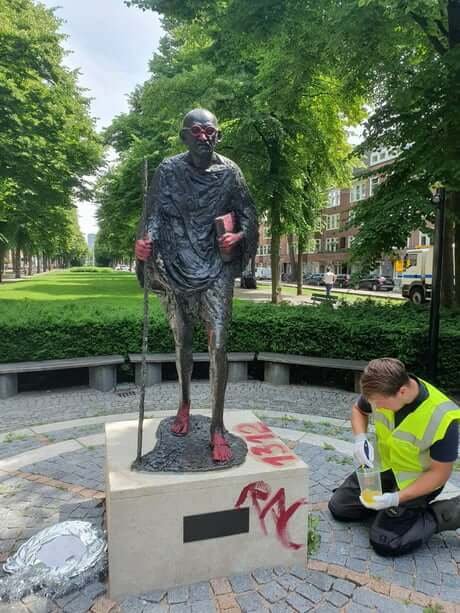 It is not yet known who is behind this incident. An employee of Kunstwacht, who takes care of the repairs and maintenance of the statue, said that cleaning the statue can take hours. 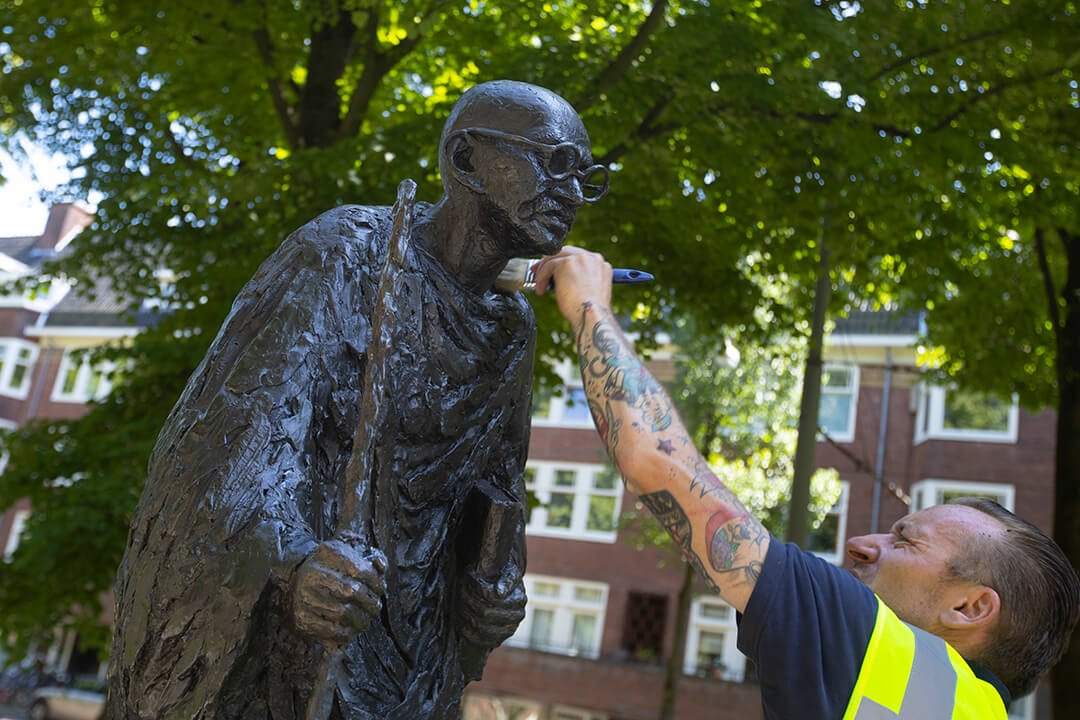 A 75-year-old man saw the daubs on Wednesday and called the municipality. “I have lived here for 40 years and I have never experienced this. I have been watching the statue for years,” the man said.

Since the demise of 46-year-old Floyd on May 25 in Minneapolis, US, and the resultant worldwide Black Lives Matter protests, there has been much debate about street names and statues of people that had a colonial past. All over the world, statues of controversial historical figures are brought down or defaced. 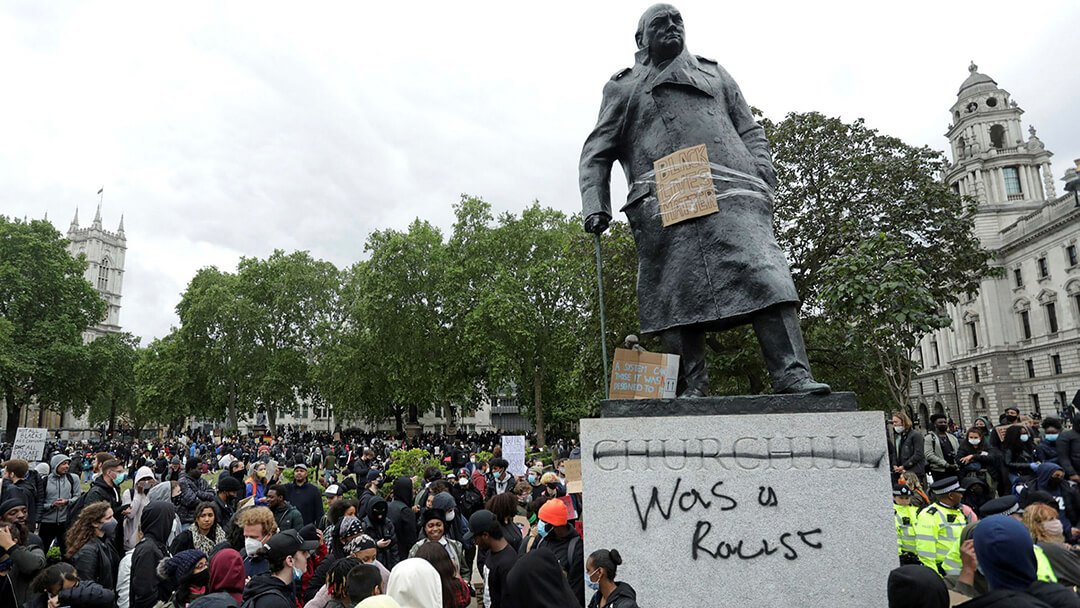 Recently, images and buildings have been defaced in various places that refer to the colonial past of the Netherlands, including the ‘Tropenmuseum’ in Amsterdam and the statue of ‘Piet Hein’ in Rotterdam. These are anti-racist expressions that follow the death of Floyd through a white police officer, Metro reported. 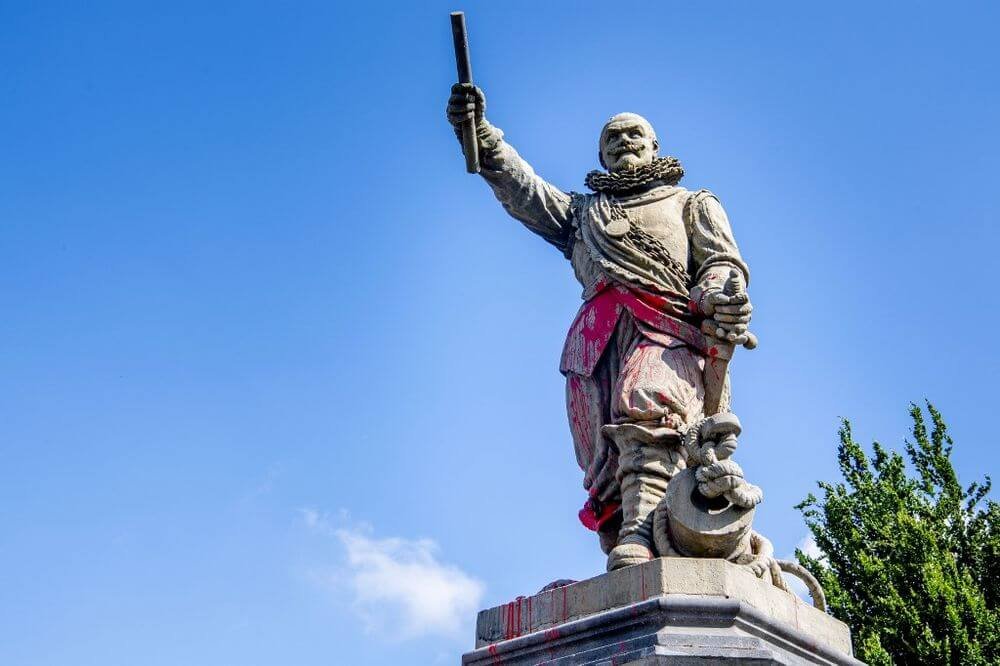 Gandhi was known as a champion of human rights and practices non-violence. But in his twenties, which he spent in South Africa, he still called black people “troublesome, very dirty and they live like beasts” and found that the white people were the “dominant race”. Later he renounced those ideas, the report added. 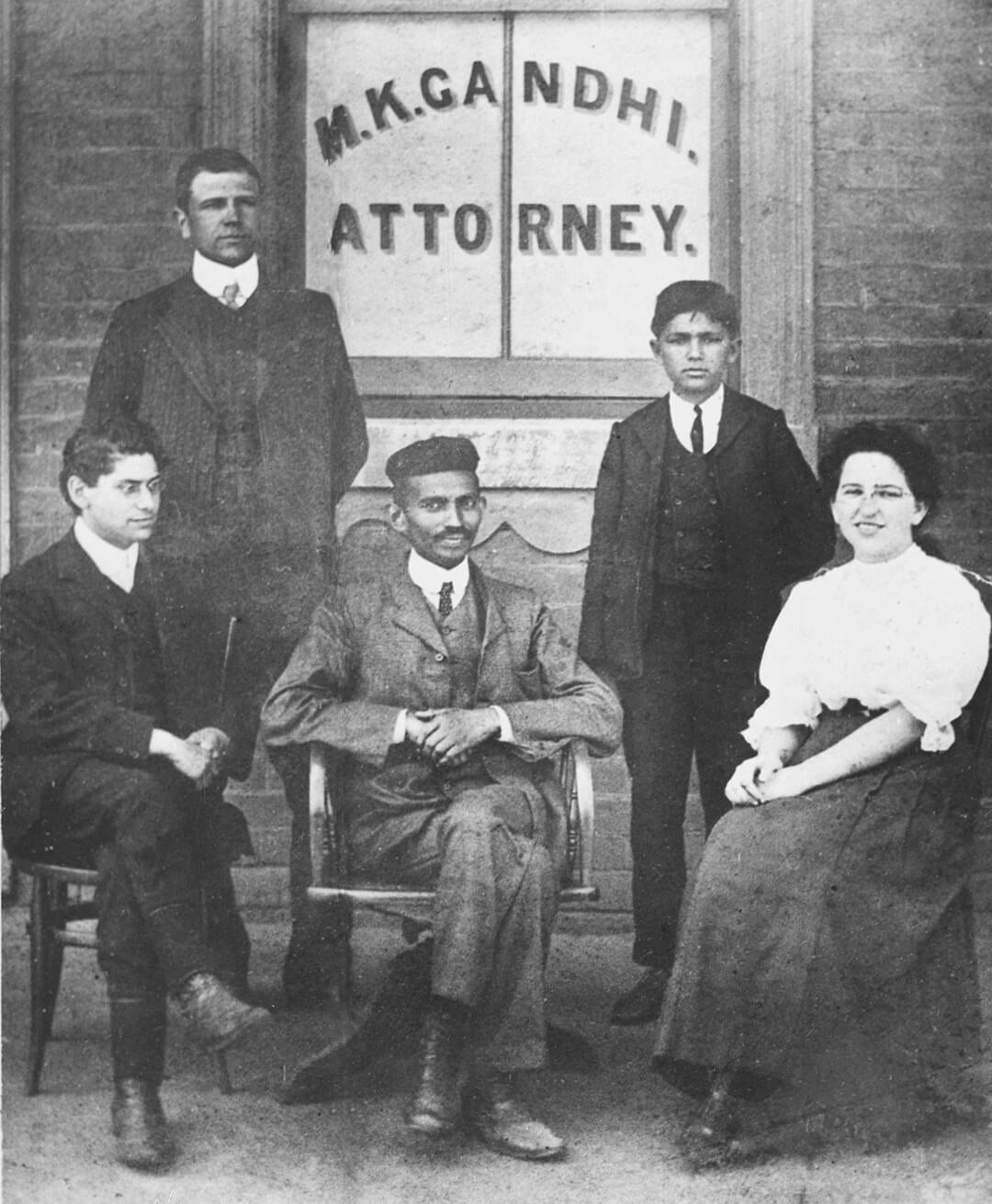 The statue was unveiled in Churchilllaan on 2nd of October 1990 in honor of Mahatma Gandhi’s 121st birth anniversary. 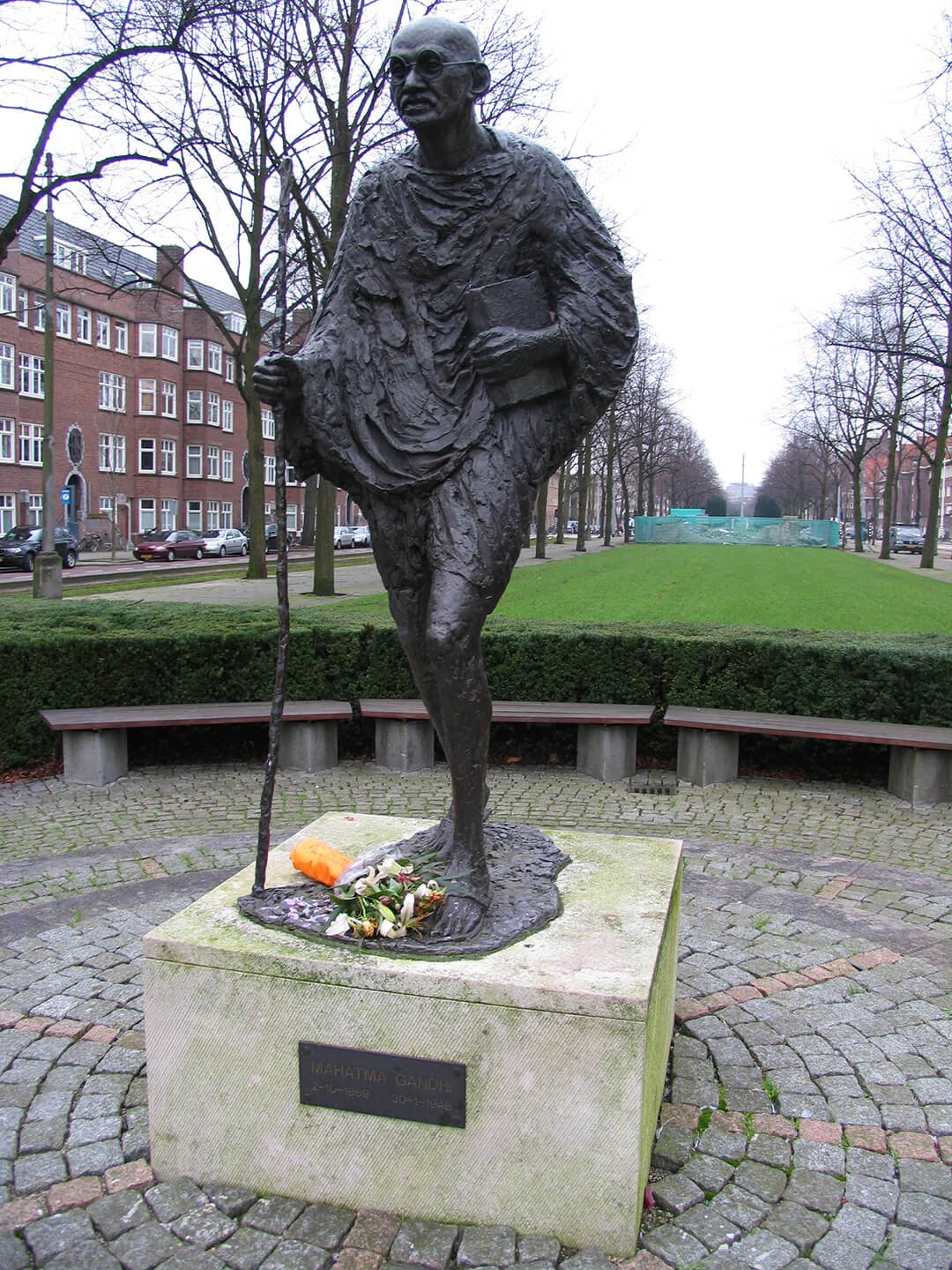 The design was made by the sculptor Karel Gomes, who died in 2016. At the time, the plan for the statue came from the Hindu organisation Triveda. Gandhi is depicted walking, featuring robes around the body, slippers on the feet, a book in one hand and a stick in the other.