A case has been registered against eight people in the Bollywood actor Sushant Singh Rajput’s suicide case. Lawyer Sudhir Kumar Ojha has filed this case in Muzaffarpur, Bihar. Those against whom this case has been filed include the names of filmmaker Karan Johar, Sanjay Leela Bhansali, Salman Khan and Ekta Kapoor. A case has been registered against them under sections 306, 109, 504 and 506 of IPC.

Advocate Sudhir Kumar Ojha says, “In the complaint, I have alleged that Sushant Singh Rajput was removed from around seven films and some of his films were not released. Such a situation was created which forced him to take the extreme step”

In the complaint, I have alleged that Sushant Singh Rajput was removed from around seven films and some of his films were not released. Such a situation was created which forced him to take the extreme step: Advocate Sudhir Kumar Ojha

Statement by Sushant’s Father and sisters

Sushant’s father KK Singh and two sisters have given their statement to the police. His father told the police that his son often felt sad, but he did not know that his son was going through depression. Senior officials of Mumbai Police told that the family has given them the information that they did not know why Sushant was in depression. Not only this, the family has also denied suspicion of any foul play behind this incident. The police have also questioned Sushant’s creative manager Siddharth Pitani in the case.

Sushant was in depression since several months

Earlier, Maharashtra Home Minister Anil Deshmukh tweeted that while the post mortem report says that actor Sushant Singh Rajput committed suicide by hanging himself, there are media reports that he allegedly suffered from clinical depression because of professional rivalry.

While the post mortem report says actor @itsSSR committed suicide by hanging himself, there are media reports that he allegedly suffered from clinical depression because of professional rivalry. @MumbaiPolice will probe this angle too.

After this tweet by the Home Minister, the police said that they might talk to Sushant’s friend Mahesh Shetty once again to get information about whether Sushant was a victim of depression due to professional enmity in the industry. It is being said that Sushant was in depression for the past six months, but the reason behind his depression is not known yet. No suicide note was found near Sushant either.

Everyone is shocked by the news of Sushant’s demise. Many people on social media are of the opinion that nepotism was the reason behind Sushant’s move and hence they are opposing filmmakers like Karan Johar. Protests have also taken place in Bihar over Sushant’s suicide. People burned effigies of many filmmakers and actors. 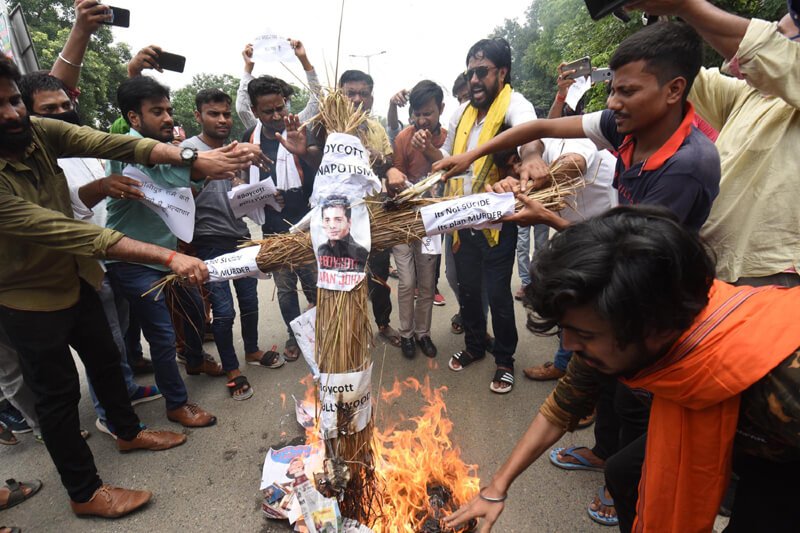 On social media too, people are expressing their anger. Big names of the industry like Kangana Ranaut, Raveena Tandon and Ranveer Shorey have also reacted to the news and given their opinion on it.

#KanganaRanaut exposes the propaganda by industry arnd #SushantSinghRajput's tragic death &how the narrative is spun to hide how their actions pushed #Sushant to the edge.Why it’s imp to give talent their due &when celebs struggle with personal issues media to practice restraint pic.twitter.com/PI70xJgUVL

This actually unfolded on a popular Bollywood awards show:

A star kid is co-hosting the show. They announce the next category – Best Actor. The nominees are played out, and the star kid is one of the nominees. Surprise-surprise!

The star kid walks from the host’s dias to accept the award and makes a short thank you speech and heads back to hosting the rest of the show like business as usual.
This is how mainstream Bollywood is a family.
– The End –